To investigate the effect of the anterior cruciate ligament (ACL) torsion in 90° knee flexion on the morphological appearance of the ACL.

Sixty knees from fresh frozen anatomical specimens were dissected. Eighteen knees were excluded according to selection criteria (torn ACL, mucoid degeneration of the ACL, arthritic lesions of the notch, or knees harboring synovial inflammatory pathologies). After the removal of the synovial membrane, the morphology of the ligamentous fibers of the ACL and the twist were analyzed. Twisting of the ACL was measured using a goniometer in 90° knee flexion and defined by the angle of external rotation of the femur on the axis of the tibia required to visualize a flat ACL. The orientation of tibial and femoral footprint was described in a coronal plane for the tibia and a sagittal plane for the femur.

In the 42 knees that were finally included, the ACL was always displayed as a single ribbon-like structure. The torsion of the fibers was on average 83.6° (± 9.4°) in 90° knee flexion. The twisting could be explained by the different orientations of the femoral (vertical in a sagittal plane) and tibial (horizontal in a coronal plane) footprints. An intraligamentous proximal cleavage area was encountered in 11 cases (i.e., 26%).

The ACL is a twisted structure with 83.6° of external torsion of fibers in 90° knee flexion. It is the torsion in the fibers, due to the relative position of bone insertions, which gives the ACL the appearance of being double bundle.

The concept of the torsional flat structure of the native ACL may be of importance during ACL reconstruction, both in terms of graft choice (flat rather than cylindrical) and of technical positioning (torsion). 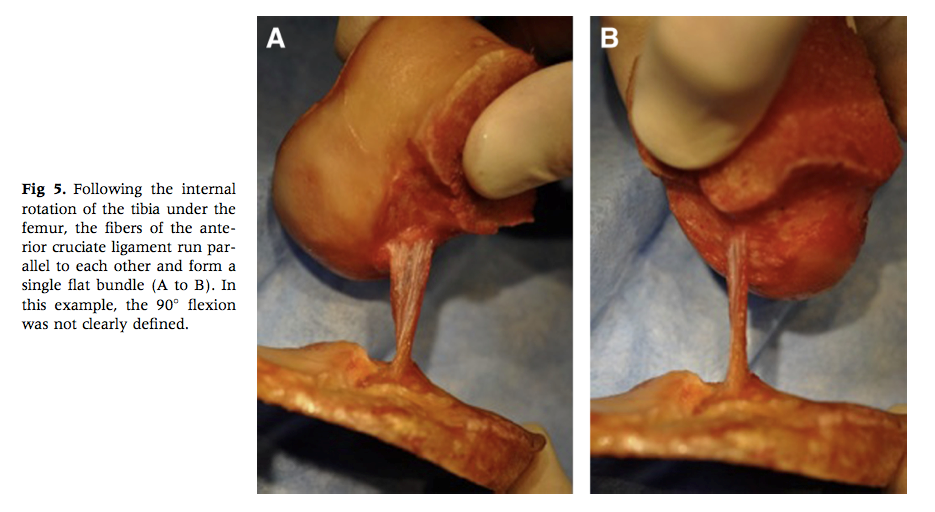